Marie Kondo, the Japanese tidying guru, took center stage on January 1st when her Netflix show, Tidying Up with Marie Kondo, premiered on the platform. Although she only recently reached American audiences, Kondo has been helping people organize their homes for much longer.

KonMari, Kondo’s self-named method of tidying, is supposed to help declutter your home by category. This way, you can sort through your possessions and give them a specific place they are kept to prevent them from becoming disorganized in the future. She started the craze of asking if items “spark joy” to determine what should be kept.

There are tons of home organizers to help you “tidy up”. Expertise.com searched through 88 in the St. Louis area to find the Top 15. They select which are the best by looking at several criteria: reputation, credibility, experience, availability, and professionalism.

Whenever you have items that aren’t bringing you joy, Junk Crusaders can help you get rid of them. We take your unwanted possessions for you, so you don’t have to worry about your home becoming cluttered! Give us a call at 314-390-1366 to get an instant quote or use our online booking tool to plan when you’d like your items picked up. For junk removal in St. Louis, leave it to Junk Crusaders!

For more details about KonMari, read the article featured below. Accessed from Junk Removal Authority.

She created an empire around the concept of tidying, and it could change your life.

Most people can only dream about amassing the kind of success Marie Kondo has at just 34-years-old. The #1 New York Times best-selling author of The Life-Changing Magic of Tidying Up, star of Netflix’s Tidying Up with Marie Kondo, and one of Time’s 100 Most Influential People, has become a household name because of her categorical style of tidying. Referred to as the KonMari Method, this approach shifts how to organize and let go of items that aren’t benefitting us. “It’s such a different way of organizing. By gathering everything within a specific category, you can actually see what you have so you don’t feel overwhelmed,” says Charlotte-based KonMari consultant Shannon Huneycutt. “People can finally get a handle on decluttering and organize what they have. There’s an automatic ‘wow’ sensation you experience with KonMari, like an energizing jumpstart that motivates you to continue.”

Although her story seems like that of an overnight success, Kondo’s lifelong interest in organizing had early beginnings as she formed a tidying consulting business at 19-years-old while still a student in Tokyo. Fifteen years have passed since then but Kondo is still finding success in helping bring order to people’s homes, and lives, as well. Her consultancy program was established in 2016, and now, more than 200 certified consultants later, you can have your home KonMari’d using the same decluttering techniques. “I began the process to become a certified consultant in August 2017 and finished a year later,” says Huneycutt. “I was a teacher before becoming a stay-at-home mom. Eventually, I wanted to return to the workforce and was looking for a way to become a certified organizer. My husband actually mentioned Marie Kondo to me and encouraged me to read The Life-Changing Magic of Tidying Up.”

Netflix subscribers quickly binged the eight-episode season of Tidying Up with Marie Kondo that premiered on the platform on January 1. As a result, viewers tagged their organization transformation posts with #TidyingUpWithMarieKondo. Just four months following its’ release, the hashtag has already been used over 35,000 times on Instagram. Not to mention, Kondo’s “spark joy” ideology has brought people to examine their possessions in a new light. Does this item spark joy? If the answer is ‘no’, then, according to Kondo, it’s time to get rid of it. Donation centers, like Goodwill, reported increases as high as 367% compared to annual averages following the show’s premiere.

Perhaps you’re looking to join those who have tidied their home already. But before you do, you should know how to tidy.

The Six Basic Rules of Tidying

“People around the world have been drawn to this philosophy not only due to its effectiveness, but also because it places great importance on being mindful, introspective and forward-looking.” (KonMari.com) 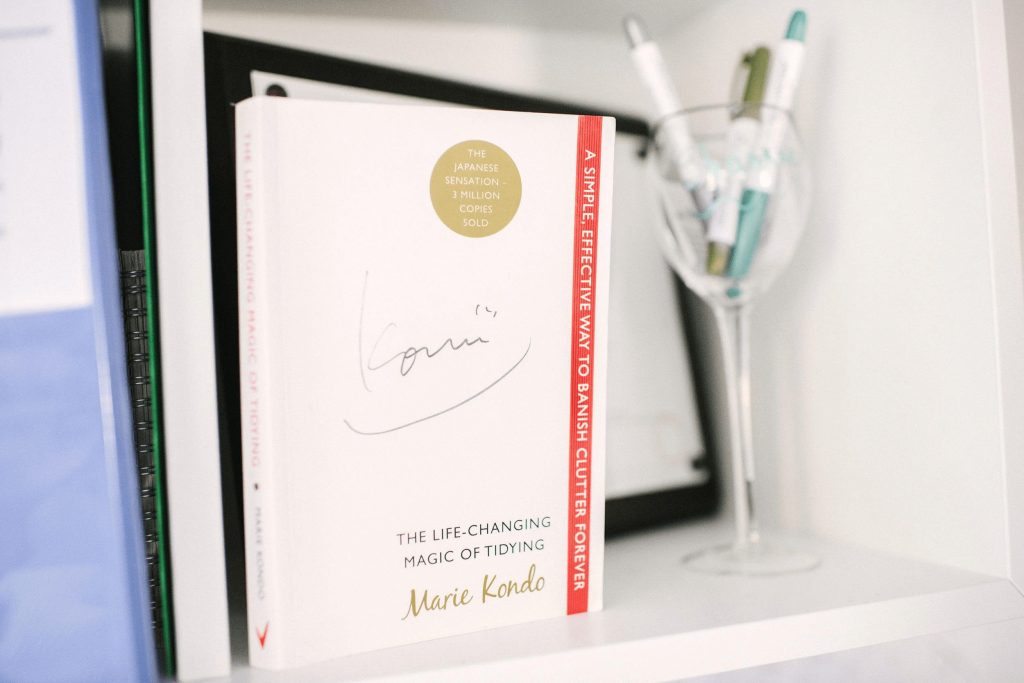 Signed copy of “The Life-Changing Magic of Tidying”, courtesy of Shannon Huneycutt

Kondo clearly outlines her process of tidying within her best-seller; these six rules serve as a framework to the KonMari Method that help you to intentionally tidy your home like never before.

Commit yourself to tidying up

According to Huneycutt, tidying is “one-and-done”, meaning that everything should have a place it is kept. “This helps simplify daily cleaning, since everything has a home.”

Kondo recommends taking a minute to close your eyes and visualize what this would look like. Inspiration is everywhere: Pinterest, design magazines, home improvement networks, and more!

Before you can put everything in its’ place, you must determine what stays (and what goes). It can be difficult to part with some of our belongings, especially if they are sentimental possessions. This rule is closely related with the sixth and final rule; but, ultimately, it is important to downsize before you can make the decision for where something will be kept.

Tidy by category, not by location

Possibly the most eye-catching aspect of tidying, Kondo instructs you to start your “tidying festival” by category, like clothing, first. “With the KonMari Method, one embarks on a once-in-a-lifetime tidying festival, which is like a special event where one tidies up once and for all,” says Tiffany Ng, a Bronze-level consultant in Los Angeles, CA.

Since this style of organization is vastly different for many Americans, it can be hard to rid ourselves of papers, miscellaneous items, or things we’ve received from our friends and family. By beginning with clothing, we’re becoming accustomed with the KonMari Method and preparing ourselves for the harder decisions we will encounter.

Ask yourself if it sparks joy

How to Use the KonMari Method

The KonMari Method is most often used to tidy homes, since this is where most of our possessions are kept. However, it can be applied anywhere!

The Life-Changing Magic of Tidying

“I started reading the book when it first came out in 2014, actually with my husband, hoping that it would make him want to keep our home more orderly,” confided New York KonMari consultant Lisa Tselebidis. According to Kondo, The Life-Changing Magic of Tidying Up will finally help you declutter your home and lead to a calm, improved mindset as well. If you’re interested in the self-starter approach to KonMari, you only need to crack open the cover.

Tidying Up with Marie Kondo

It seems hard to predict how successful a show will be but Tselebidis thinks that’s one of the biggest reasons the KonMari Method has captured the attention of people worldwide. “Why do I think it’s gotten so big? Well, first of all, it was on Netflix! It’s also pretty unconventional compared to the way we think about our things in America, which is a good indication something will gain so much popularity. People can relate to the disorganization they saw on the show. Marie comes into a home with a very non-judgmental attitude and really touches the soul of the people she meets,” says Tselebidis. “It’s not about the stuff; it’s about tidying up to live a life that makes you happy.”

Given the participation that ensued following the show, it seems simple enough to understand the basic methods that make up KonMari in order to tidy your own home. In fact, breaking down the process in real, cluttered homes may have made the phenomena even more relative. However, given that the Netflix show isn’t all-encompassing, it could be good to follow a KonMari checklist as well (especially if you haven’t read the books).

For Huneycutt, and others with an affinity for organizing, consulting is a perfect fit. It seems that they, similar to Kondo, were drawn to tidying at a young age. Tselebidis says that she always had a more minimalist style, but KonMari isn’t the same thing. “For some consultants, organization didn’t come natural. KonMari helped them completely change their methods. I always felt unfocused whenever I had clutter around, so I was never messy, per say, but KonMari took my organization to the next level.”

Each consultant falls within a specific level. At the earliest stages, a KonMari Method consultant is certified green with minimum requirements of 10 tidying sessions with two clients. “Rankings are based on the number of hours you have completed with clients. You begin at green and reach higher ranks as you complete more hours with more clients. I have been a certified bronze consultant for about three months and have over 200 hours of tidying completed with my clients. From there, the levels progress to silver, gold, platinum, and then, finally, master.”

Consultants help facilitate the KonMari Method, without you needing any knowledge of the KonMari system. You’ll likely spend multiple sessions with your consultant, since tidying is separated by item type, rather than room-by-room organization.

“Some people think following the KonMari Method means you have to get rid of everything, which isn’t the case. You still need practical things, like a toolkit, for example, because it serves a purpose. Ultimately, KonMari is about living your life with people and things that you love–that’s why it’s “life-changing”. What kind of life do you want to live? The KonMari Method ensures that you’re living it to the fullest and being happy,” says Huneycutt.

Junk Removal and the KonMari Method

It seems inevitable that you will eventually discover something that doesn’t spark joy in your home. In the Tampa Bay area alone, an additional five million pounds of donations were received after subscribers watched the series, so you can certainly expect to have at least some donatable or unwanted possessions. “For example, when you gather all of your clothes, every single article, into one big pile, you may realize that you don’t want to live with so much,” says Ng. Whether that’s furniture, clothing items, or miscellaneous goods, you need an effective method to remove your unwanted items. 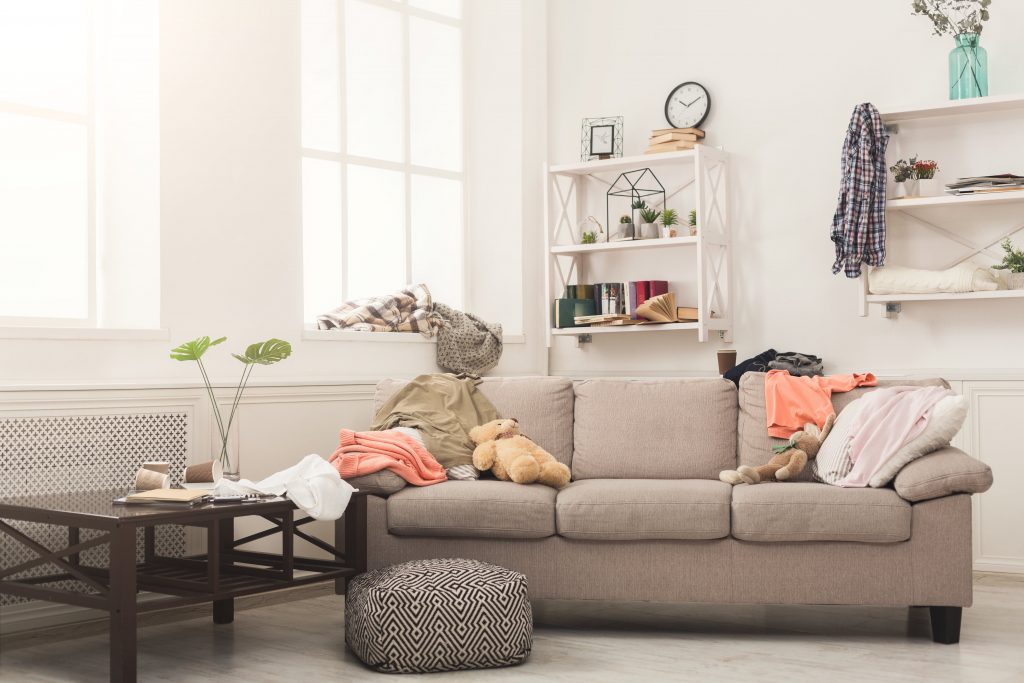 Since you’ve already identified the items you don’t want to hold on to, finding a quick and easy solution to getting rid of everything is the most logical option. Professional junk removal services help to alleviate the stress of finding the proper way to dispose of everything, since some items may be classified as household hazardous waste, or are just too large to remove by yourself.

So, is the KonMari Method your perfect solution to decluttering your home? Well, it could be. If you don’t struggle with keeping your home tidy, you probably fall within the minority of people, which begs the question: why do so many of us have issues keeping our things neat and organized? Perhaps a different perspective will be a sustainable solution to solve your cleaning woes.